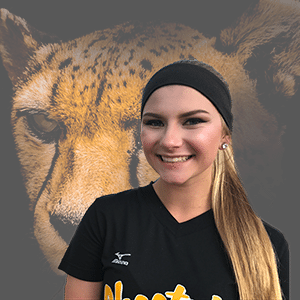 Audrey has been involved with the Downers Grove DOLLS & Rebels/Cheetahs for 12 years.  She is a Product of the Organization.  She played DOLLS in-house for 4 years before starting her travel ball career.  As a Downers Grove Rebel, she played for 6 seasons 8U – 13U.  In which her teams placed 3rd at ASA Nationals (12U) and 2nd at USSSA Nationals (13U).  In 2016, as a 14U player she elevated to the Chicago Cheetahs as the 1st 14U Cheetahs team ever in the organization.  Her 14U Cheetahs team took 2nd Place at PGF Nat. Qualifier in New Jersey – Earning a Premier Bid to California, 5th Place Finish Triple Crown Sparkler in Colorado earning a Power Pool bid for next year, and placed in top 6 in all of the ASA/PGF Tourneys competed in.  She was the 1st Cheetah player to compete at PGF Nationals as a 14, 16 and 18U player.

She Is Currently a Freshman at the College of the Holy Cross (D1) in Massachusetts and will be pitching for the Crusaders. She is majoring in Biology.