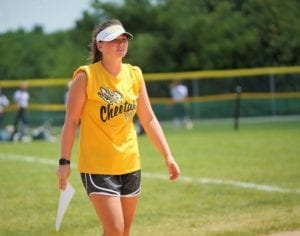 Emily has been playing softball since she was 8 years old. She played on many different travel teams, but ended her travel ball career with the Chicago Cheetahs-Bowman. Her final year she pitched at PGF Nationals with her team that placed 33rd.

Emily is entering her senior year at Elmhurst College where she pitches for the Bluejays. She is majoring in Communication Sciences and Disorders and will be continuing on to get a masters degree to become a Speech-Language Pathologist. She maintains a 3.8 cumulative GPA while being an active member of many clubs on campus.

Emily started her coaching last season at the 16u level with head coach Sabrina Kuchta. She mainly worked with the pitching staff and called pitches during games. Emily sees coaching as a way to give back to the game that has always meant so much to her growing up! She will continue her coaching with the 16u Chicago Cheetahs this upcoming year along side head coach Sabrina Kuchta again and is exciting to still be involved in the program!