Four year starting Varsity pitcher and 2008 Hall of Fame inductee as a pitcher and member of first team to down state for Loyola Academy.

Maral went on to play at the University of Illinois at Chicago. She spent three years playing for the Flames and then retired from playing. The following four years, Maral was the assistant varsity coach at Loyola Academy. When her son was old enough to begin playing, she took some time off from coaching softball to coach house league and travel baseball.

Maral spent the past four years as Director of Softball at Playball USA Northbrook and the Dugout respectively and recently shifted gears professionally to pursue a masters in Social Work. Softball gave Maral her voice and strength to believe in herself, she only hopes to help athletes find themselves through this amazing sport. 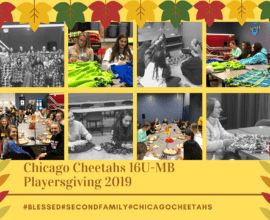 We had our inaugural playersgiving today. The girls made blankets that will be going to active service man and women